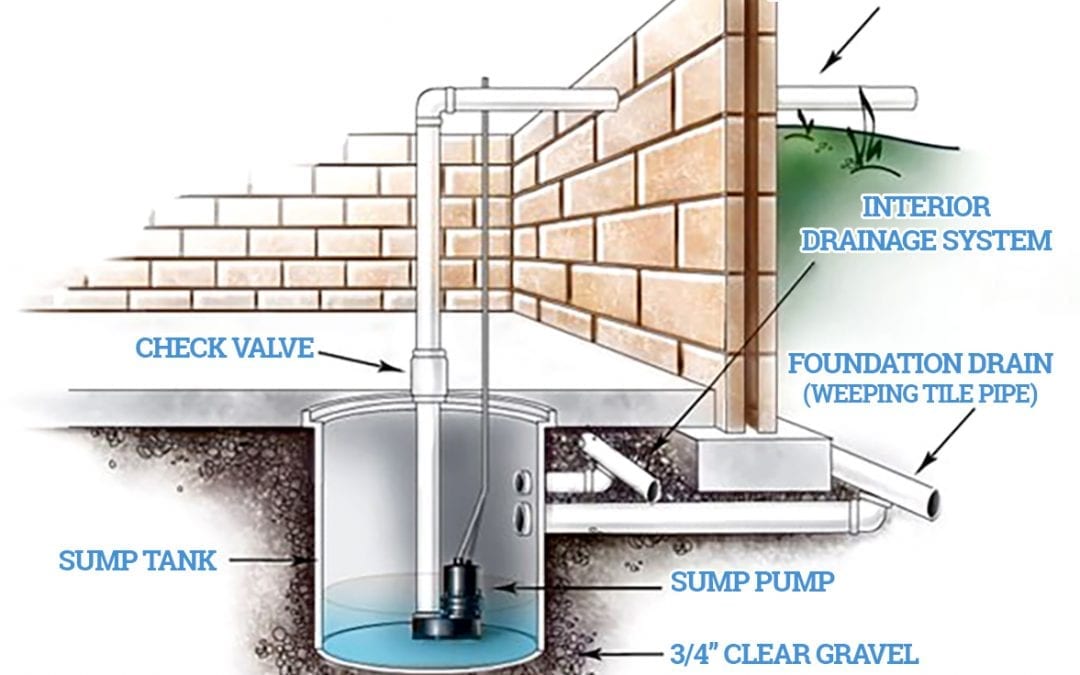 French drains are underground water management and drainage systems developed by the ancient Romans but popularized by Henry French, a Concord, Massachusetts judge and farmer, who wrote about them in his 1859 book, Farm Drainage.

Generally, French drains are installed at grade level to redirect surface water. Good drainage is important to ensure that a home, particularly a basement, stays dry and free of mold. A wet basement and the associated groundwater accumulation can affect the structural integrity of a home, dramatically reduce the home’s value, and cause a number of health-related problems.

For cases involving hydrostatic pressure (water pressure from things such as underground springs, rivers, ground water, etc.) and a fluctuating high water table (a build-up of ground water that lies close to the surface of the earth) an interior French drain is needed.

The interior French drain, also known as the Vulcan hydrostatic pressure relief system, was designed, invented and patented by our Vulcan Basement Waterproofing forefathers in the mid 1960’s. This basement waterproofing method has withstood the test of time and today remains the industry standard worldwide.

A shallow curtain drain can be used to eliminate problem areas on your property where water build-up can occur, such as a low spot on the lawn or a continually washed out landscaped bed. It can also be used to divert water around your house. This fairly shallow drain extends horizontally across your property, uphill of the area you want to dry out and redirects the water to either side.

A curtain drain usually consists of a trench, often lined with landscaping textiles that prevent clogging from dirt or roots and one or two perforated pipes surrounded by gravel, (depending upon sizing and redundancy requirements and always placed perforated side down), and covered with sand for further filtration of sediment.

In addition to their primary function of directing water away from your home, exterior French drains are also environmentally proactive as they can lead to a dry well, a structure that returns excess water to the supply of groundwater, or to a rain garden, an environmentally friendly invention that uses wetland plants to absorb excess water and return it to the atmosphere through transpiration.

Any retaining wall that is built into a hillside should incorporate a French drain so that the wall footings don’t give out from the water pressure that can easily build up behind the wall on the downslope.

A hydrostatic pressure relief system requires no outside digging or destruction of property. It involves cutting a trench in the floor around the perimeter of the basement, next to the foundation walls. The trench must be excavated down to the footings and perforated pipe is laid all the way around. The system must be adequately sized so that it can carry off all the water to a collection tank sunk into the floor (sump well) and a sump pump carries it out to the yard or a storm drain. After the pipes are installed, the trench must be filled with gravel, bleeders installed in the block walls, and the trench re-covered with concrete. The channel is patched with a thin layer of concrete, except for a small gap at the edge to catch any water that comes down the wall.

If the hydrostatic pressure relief system is not properly designed, it will clog and backup, or worse yet, undermine the integrity of your foundation. So, even though a handyman or homeowner could conceivably install the pressure relief system himself, he would probably do better to engage an insured professional waterproofing contractor to do the work – and a contractor like Vulcan, who provides a lifetime guarantee so you can permanently end your struggles with a leaky, wet basement.

Our company made many efforts the late 1940’s thru the early 1960’s trying to discover basement systems, materials and methods that would ultimately best conquer the problem of basement water seepage.  During this early period we experimented using epoxy like materials, excavating the outside and trying different chemical compounds.  Up to this time our philosophy centered on stopping the water before it entered the basement. However, thru trial and error, it became apparent that you just can’t stop water. It was clear to those pioneers that the forces of nature were too strong to hold back. Our forefathers decided by the late 1950’s that the use of drain tile or drain systems would be a great way to combat the water pressure that causes most basement water problems.

In the early 1960’s Vulcan Basement Waterproofing really started to get involved with what we know of today as the Pressure Relief System. Around 1965 the company decided that the best way to handle more serious basement water problems is through this new pressure relieving philosophy. The idea was groundbreaking and on the cutting edge and revolutionized the industry. In 1966 Vulcan Basement Waterproofing was given a patent on this cure and we called it the “Vulcan Pressure Relief System”. This approach of using the long term solution of relieving the water “pressure” to control basement water problems by the means of installing the pressure relief system has allowed us to put an end to most basement water problems.

A leaky, wet basement has always been and will continue to be a phenomenon that will afflict the majority of homes with basements throughout the United States. During the last 70 plus years, many companies have come and gone in the basement waterproofing industry. Most of these entities try to emulate the success of Vulcan Basement Waterproofing. Naturally they have attempted to copy our pressure relief system in their own way. However we are the only company that can truthfully advertise the fact that our method is the original one.

Established 1947 Our Only Business for Over 65 Years